Also in July this year, I participated in Startup Weekend Adelaide which, like Unleashed, was a great event where I met a lot of awesome people, but unlike Unleashed, is less focussed on actually building something that weekend and is more focussed on showing that you have a viable business idea. I didn’t have an idea, but I was impressed by the calibre of ideas pitched! I joined a team called Lend A Skilled Hand, which aims to connect skilled volunteers with projects and opportunities that better fit their skills. As someone who volunteers a lot, this idea was important to me, and the team members were what sold me on joining them (protip: if you’re trying to convince someone to join your team, just “remind” them that you went to primary school together!) The Lend A Skilled Hand (LASH) team is a great team and I love them all dearly.

Over the course of the weekend we designed and built our website, filmed some great videos, and generally had a lot of fun together. We came up with a lot of ideas on how we could build our idea and what avenues we could tap into. Before we knew it, it was Sunday night and time to pitch the polished idea to the judges! Sam (the main idea man) did an absolutely fantastic job of the presentation! The hard work of the entire team throughout the weekend was immediately seen when we were awarded a scholarship to attend Flinders University’s New Venture Institute’s Venture Dorm program. The team were, of course, absolutely thrilled by that, and we all decided to keep going with the idea!

I’ve been blogging a bit about our experiences at Venture Dorm, which you can find here, but I might write a bit more about what I’m personally getting out of it. 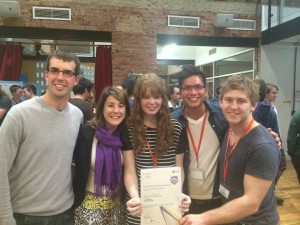 The LASH team – Matt, Jess, me, Sam and Nick

In July this year, I participated in Unleashed (or as it’s known in other states, Govhack) with my friend Nick. Unleashed is an open data competition where competitors are encouraged to mash up different data sets to create something valuable and useful. Nick came up with our great idea called The Coworking Society. The Coworking Society aims to connect independent workers through Adelaide City Council’s free wifi network by providing them with a place to meet and network.

Unleashed Adelaide took place over a weekend and was very much a hackathon of sorts. We had a lot of fun, and met a lot of awesome people who are also passionate about open data and making awesome things.

Last weekend the awards ceremony was held, and Team WarTapir was successful in being highly commended nationally, as well as winning two awards – the Majoran Co-working Mega Prize and the Best Entrepreneurial Concept by a Youth Team. The Majoran Mega Prize means that we get to be a part of the Mega program run by Majoran Distillery where we get to further develop our idea and business model! This started on Thursday last week and is very exciting, so expect further updates on this! 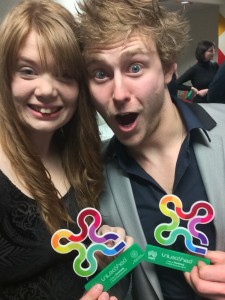 Here I’m going to detail my adventures. I’ve recently just completed a Bachelor of Computer Science (Advanced) and have just started my Honours degree. In the last two months or so, I’ve been introduced to the startup culture and I’ve fallen in love with it. I’m also super passionate about getting more people interested in the tech industry, and I’m also passionate about education. A lot of the posts I make here will likely revolve around all of these things.